Chesapeake Performance Models (CPM) has made some of the most eye catching graphic paint jobs in the country. We can incorporation corporate logos... learn more

CPM can build or refurbish most any boat to any level of construction from race ready condition or just to get it back on the water for an afternoon sail...learn more

CPM is capable of fabricating parts and systems to accommodate your needs. From radio board systems to rigs to individual fittings
...learn more 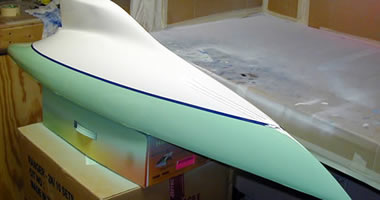 We have just updated our web site image, content & layout and hope you like it. If you see a problem please let us know so that we can address it. Thank you for your support and visiting our web site. 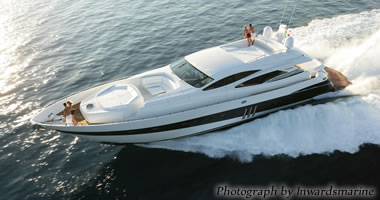 We just returned from a great Chicago Boat Show and New England Boat Show in Boston. On the way back from the show we stopped in at Paragon Products the pick up the first US production run of CR-914 Black trees.

For those of you that are not familiar with Test 505, 18-20yrs ago there was a sailcloth that was made called TEST 505.

It is a Mylar/scrim laminate that has the advantage of being very light and very strong. The cloth was unique in that it is very stable over a wide range of wind strengths while holding its shape over 360 degrees of load. Other laminates are prone to elongate at +-45 degrees. Test 505 also has a very smooth surface when compared to other laminates and while it could not take the abuse of big boat sailing it was perfect for our hobby. Unfortunately as is often the case is was only put into limited production and soon became unavailable. After over two years of work David Ramos of Chesapeake Performance Models (CPM) in association with Chuck Luscomb and Ernest Freeland finally put all of the pieces together to make this sail cloth available again under the new name CPM 505. The cloth was made in a 60" width a cost of $25/yd. CPM received the first production run of CPM 505 in late 2007 and have had fantastic regatta results. The '07 and '08 EC12 Meter Nationals and the Star 45 Nationals were all won using CPM 505.

As the popularity of the CPM505 has grown and the race results have come to show, this cloth makes very fast sails.
The demand has been so great that CPM has had to make another production run.

We are just received the latest production run of CPM-505 and now have it in stock again.